Without a doubt, one of my favorite speeches, the ‘Man in the Arena’ speech, was delivered by Theodore Roosevelt on April 23, 1910, at the Sorbonne in Paris, France.

While I have many thoughts about September as it draws to a close today, I am choosing to use Roosevelt’s words instead of my own.

“It is not the critic who counts; not the man who points out how the strong man stumbles, or where the doer of deeds could have done them better. The credit belongs to the man who is actually in the arena, whose face is marred by dust and sweat and blood; who strives valiantly; who errs, who comes short again and again, because there is no effort without error and shortcoming; but who does actually strive to do the deeds; who knows great enthusiasms, the great devotions; who spends himself in a worthy cause; who at the best knows in the end the triumph of high achievement, and who at the worst, if he fails, at least fails while daring greatly, so that his place shall never be with those cold and timid souls who neither know victory nor defeat.”

I watched something spectacular over the last 30 days at our son’s high school.

I watched our student body and our parent community transform awareness into action on behalf of children facing cancer.

I watched our student body give of their time to circulate through the cafeteria and the courtyard with jars to collect coins at lunch on Wednesdays and Fridays throughout the month of September.

I watched our student body give coins, dollar bills, $5 bills, $10 bills for a total of just over $2100 to fund childhood cancer research and patient and family services.

I watched “Gladiators Go Gold” t-shirts sell out in 90 minutes because the students were aware that $4 of every $10 shirt sold would be donated to Cure Childhood Cancer.

I watched our high school’s Childhood Cancer Awareness Club place the yellow gold ribbon of childhood cancer on the helmets our Gladiators would wear as they stepped into the arena to take on a region rival beneath the Friday Night Lights.

I watched our student body strive valiantly to spend themselves on a worthy cause.

I watched our student body come together in support of children and teens unknown to them facing the unthinkable, facing childhood cancer.

I watched as our student body stepped into the arena, Gladiators, resolved to know the triumph of high achievement that they may never be named among the critics who sit in the stands “pointing out how the strong man stumbles or the doer of deeds could have done them better.”

I watched as our Gladiators dared greatly, faces marred by dust, sweat, and blood, in a game dedicated to every child, teen, family facing cancer committed to conquering childhood cancer once and for all.

Yeah, I watched something spectacular over the last 30 days at our son’s high school; they’ve got game on AND off the field!

#JustConquer: this day, every day 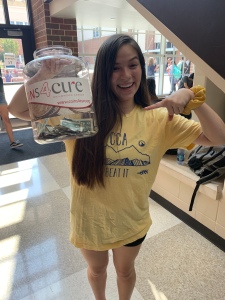 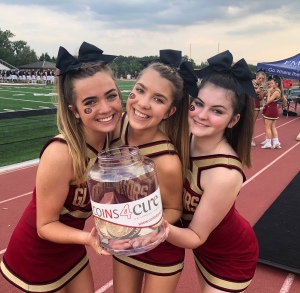 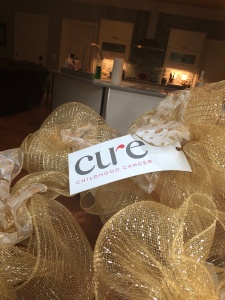 Looking for Something in Particular?

Living the Cure: Where Informed is the New Black

Living the Cure: Where Informed is the New Black